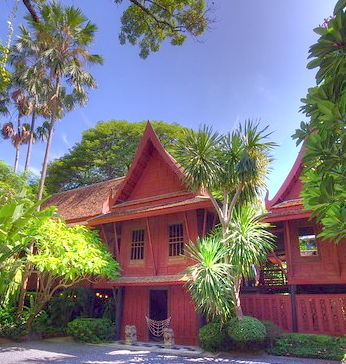 An integral part of the national museums, Jim Thompson’s house in Bangkok has a collection of exceptional art objects in its teak walls, with an authentic Thai architectural style. More than a visit, the discovery of the domain and its contents is a real cultural journey.

Jim Thompson’s Thai home in Bangkok, set in the greenery along Khlong San Sap, is the museum of an American man who fell under the charm of the kingdom in the middle of the last century. Jim Thompson was an American citizen who came to Thailand just after the Second World War.

As the kingpin of Thai silk marketing worldwide, this esthete of Asian art has turned his den into a haven of lush tropical vegetation, Siamese architecture and art treasures.

As soon as he was settled in the country at the end of the Second World War, Jim Thompson immediately became interested in the country’s silk and brought a new breath to his production techniques and his somewhat anemic trade. time. A great lover of the arts, he undertakes, on a personal basis, a quest for beautiful objects that he keeps in his house, the major element of the museum. It accumulates for nearly thirty years, a small treasure of ancient pieces of beauty, dating for some centuries. The teak house is remarkable. Typically Thai, it actually consists of six different traditional old buildings (one in Bangkok and five in Ayutthaya province) that Jim Thompson moved and rearranged in his own way in 1959 on his property in Bangkok.

The exploration of the area is amazing. The tranquility of the place and the authenticity of the buildings give the impression that nothing has changed since the departure of the owner. The wonderful vegetation of the garden invites to daydreaming and the magnificent objects of art of the collection of the museum (porcelains, paintings, sculptures, furniture, vases …), to the trip. The house shows how much Thai architecture is of great finesse.

In the late 1960s, Jim disappeared in the Highlands in Malaysia. Mr. Thompson has never been found or heard since, although research teams have been searching for him for a long time. The craziest rumors about his disappearance still circulate to this day.

The Jim Thompson Museum is located in the Sukhumvit area, it is open daily. The tickets Entrance tickets can be purchased for 200 Thai Baht per person (6 $). Because of its location, the Jim Thompson is one of the easiest museums to visit in Bangkok.