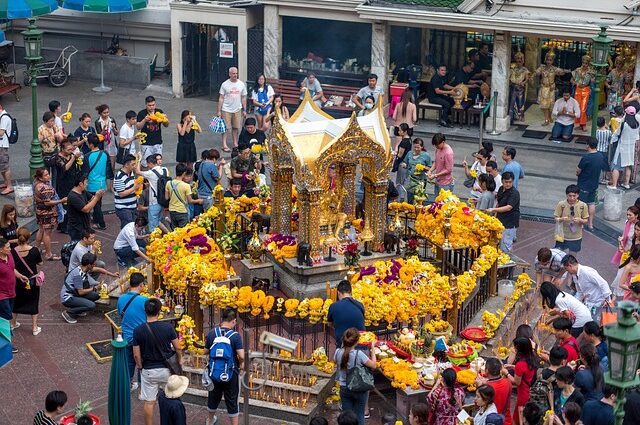 The Erawan Shrine is a Hindu temple located in front of the Grand Hyatt Erawan hotel, at the intersection of Ratchaprasong, in the Lumphini district of Bangkok. Thais and foreigners alike like to visit this place to worship the statue inside.

The translation of the word “shrine” is a bit tricky because it is not really a temple where ceremonies take place but a place of worship, a kind of shrine.

Many nationalities come here to pay homage to the four-headed statue of Than Tao Mahaprom, which is a Thai representation of the Hindu god who created the universe Brahma. A popular attraction inside the temple are the traditional ceremonial dances, performed by Thai dancers hired by the locals to make merit and voice their prayers (Tham Boon).

In the mid-1950s, the government decided to build a luxury hotel at Erawan. However, the first stages of construction encountered so many problems that superstitious workers refused to continue the work because the troublesome spirits had to be satisfied. After consulting astrologers, it was deemed auspicious to erect a shrine with a four-headed statue of the god Brahma Tao Mahaprom. The magnificent image of Brahma was specially cast and gilded by the Fine Arts Department and placed in the shrine in November 1956. The Erawan Hotel opened its doors, was enthusiastically received and became world famous for the next 30 years. Towards the end, the property could not compete with the more modern newly built hotels and was bought by the privately owned Grand Hyatt Erawan Bangkok in 1991.
The image of Tao Mahaprom is supposed to be the god Brahma, full of goodness, mercy, compassion and impartiality. Each virtue is represented separately by four radiant and shining faces. Brahma is also considered the creator whose faces symbolize the directions of the world. He therefore has vision and can protect everything, both the world and the sky. He can also help to get rid of difficulties and obstacles and bring luck and prosperity to devotees.

The shrine was originally built to beautify the Erawan Hotel, so the locals named the place “Erawan Shrine”.

Buddhism in Thailand has always been influenced by Brahmanical beliefs. The Erawan Shrine had an immediate impact, as evidenced by the endless crowds of people from morning to night. Thais and even foreign visitors come to ceremoniously offer wreaths of flowers, fruit and miniature teak elephants in the hope that their wishes will be granted. Cash contributions and donations are managed by a foundation that regularly distributes funds to various charities and hospitals in the province.

To some, this respect may seem like a superstitious belief, but in times of misfortune or ill health, we all need spiritual support. The Erawan Shrine provides this inner strength to many people and helps them solve their problems.

How to get to the Erawan Shrine:

The temple is located in the heart of Bangkok, just take the BTS Skytrain to Chit Lom station.