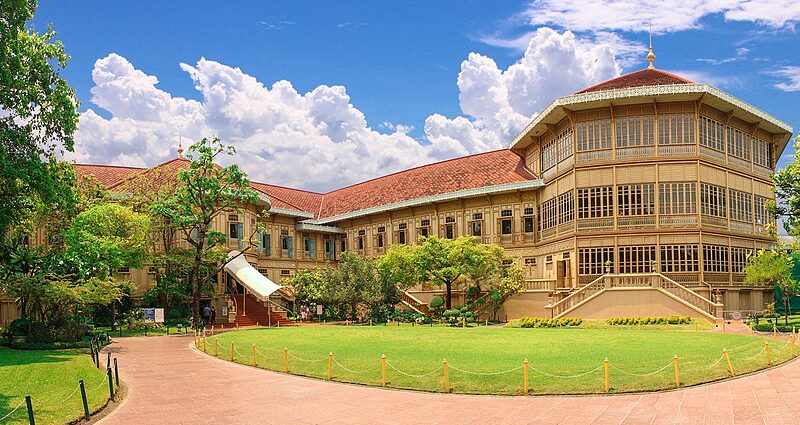 A royal residence in gilded teak, built at the end of the 19th century, is now a sumptuous museum open to all. Restored in 1982 under the impetus of Queen Sirikit, the palace has regained its former splendor.
In the heart of Bangkok’s Suan Dusit Park, Viman mek (Phra Thi Nang Wiman Mek) is the largest golden teak wooden palace in the world. Teak wood contains a special oil that makes it resistant to heat and heavy rain, and also acts as an insect repellent. Erected in 1901, at the request of King Rama V (1868-1910), the exceptional residence is now surrounded, in its royal gardens, by a multitude of buildings all containing museums.

Originally installed (in 1868) on Ko Si Chang Island in Chonburi Province (southeast of Bangkok), the royal house was dismantled and reassembled at the current location in the capital. It finally housed King Chulalongkorn (Rama V) only for five years, from 1901 to 1906, period devoted to the construction of another palace (Chitralada). After his death in 1910, only a few members of the royal family sporadically occupied the sumptuous dwelling until 1935. At that time, the residence was abandoned to the winds of Siam. On the occasion of the bicentennial of the City of Angels in 1982, Viman mek, remade identically on the model of the time at the initiative of Queen Sirikit, is inaugurated as the museum dedicated to King Rama V.

Very Western style very close to the European and Victorian architecture, 31 of the 81 rooms in the building have been restored, refurnished and decorated as at the beginning of the last century, with personal belongings of the sovereign or his family. Thus, China porcelain, crystals, furniture, paintings, statues, ivory, carpets … give a remarkable splendor to the house already exceptional in its structure (entirely pegged wood). The place highlights some rarities like the dining room covered with crocodile skin, the first bathtub of the country, the oldest typewriter with Thai characters of the king, the meeting room with the king and its magnificent royal armchairs . Visitors can see beautiful handicrafts, Thai silk with various unique patterns and Liphao basketry, as beautiful trays and handbags sprinkled with jewels of different designs such as green beetles.

In addition to visiting the Viman mek residence, Dusit Park contains about twenty other attractions such as the throne room, the photo exhibitions of King Rama IX, the Royal Car Museum