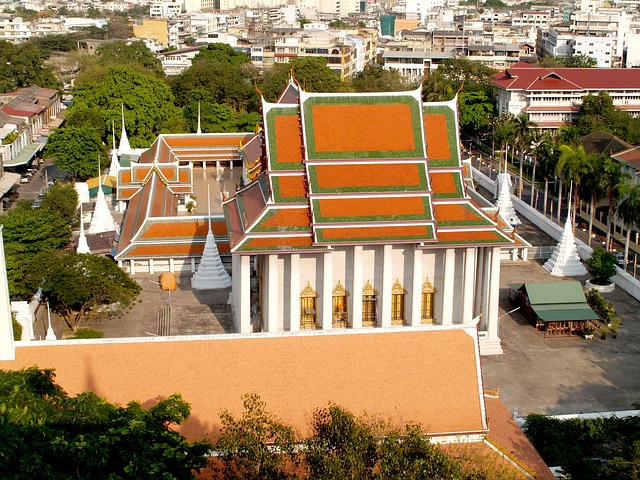 Wat Saket (Phu Khao Thong) has not only the quality to be one of the oldest temples of Bangkok but also to have in its enclosure one of the highest points of the capital. The brief visit of the religious building leaves all the leisure to enjoy an exceptional sight on the city, at the top of Golden Mountain.

Climbing the 300 steps of Golden Mountain (Phu Khao Thong) is pleasant. This climb is worth it, because in addition to enjoying the beautiful forest garden, we will appreciate the spectacular views of Bangkok. The few pauses that visitors take are animated, at strategic points, by curious tombs, statuettes judiciously placed or gongs that tourists and convinced Buddhists do not fail to make sound.

The effort to climb the circular stairs around Golden Mountain, within the walls of Wat Saket, is more rewarded by the unobstructed view of Bangkok and particularly on the island of Rattanakosin (Wat Phra Kaew, Wat Pho, Sanam Luang …) than by the originality of its temple.

Wat Saket is a very venerated temple in the city because it keeps relics of the Buddha himself brought from India. It is even more understandable when we crown the top and can see the Great Golden Stupa and its spectacular views of 365 of the city.It is understood that these relics are here as a demonstration of the greatness of Buddha.

Looking west towards the historic district of Rattanakosin, you will notice the Grand Palace, Wat Phra Kaew and Wat Arun. Wat Suthat and the Great Swing can also be seen in the distance, and walking around the chedi, we can also see the Democracy Monument and the Rama VIII Bridge.

The climbing of the artificial hill (of 76 meters made of earth and bricks) whose final construction was carried out under the reign of king Rama V, ends naturally on the step of the door of a temple. Well ordered, the visit is done in two times. The first stride engages the explorers in a place of meditation whose turn is quickly closed. The second stage which passes by a tiny staircase, on the higher level, makes it possible to the contemplative ones to discover the gilded chedi sheltering relics of the Buddha and the splendid sight on Bangkok in front of which all linger gladly.

The temple was built during the reign of the Ayutthaya kingdom, while the site itself has housed the temple under different names in one form or another for hundreds of years. In the early 1800s, the temple was turned into a crematorium due to a plague epidemic. The victims were taken to Wat Saket, located outside the city walls, for cremation.

King Rama I (reign 1782- 1809) renovated Wat Saket, but his grandson, Rama III (reign 1824 – 1851), had an artificial hill built over the temple. The design was based on the ancient architecture with a mound, considered as Mount Meru in Buddhist cosmology. Unfortunately, the soft soils and drainage of the area caused landslides, leaving the site to nature until the reign of Rama IV (1851-68), when work was undertaken to strengthen the mound so that it could support smaller chedi. The work was completed at the end of the reign of Rama V (1868 – 1910), and a relic of the Buddha found in Nepal was brought back and placed inside the chedi. Concrete walls were added to the exterior in 1940, and the locals named the hill “Phu Khao Tong”, which can be translated as “Golden Mountain”.

How to get to Wat Saket

Chakkaphatdi rd Bangkok
The temple is open to the public every day without interruption from 8 am to 6 pm. Only the access to the terrace is paying, 50 baht.