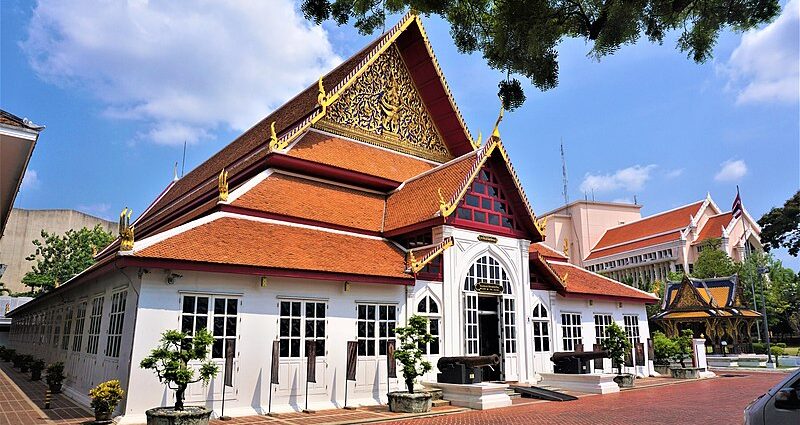 Contents hide
1 What to see at the museum
1.1 Buddhaisawan Chapel
1.2 The Red House
1.3 The Funeral Carriage Room
1.4 Video
2 History
3 How to get to the museum
3.1 Related posts:

This is perhaps the most important museum in the country and the one that represents a good starting point for your vacation in Thailand because you will certainly leave enriched and with a better knowledge of the fascinating past of this land and the local culture. A fascinating journey through the history of Thailand, from prehistory to the present day, through the world of art and religion

I advise you to take your time and devote some time to the visit, also considering the size of the museum: it spreads over a complex of different buildings, each with many exhibition rooms filled with treasures. Built by King Rama V to house the precious works and artifacts that belonged to his father, the museum has since expanded and now houses the largest and most interesting collection in the country, including ancient artifacts, works of art and Buddha statues.

What to see at the museum

The museum is housed in the Wang Na, also known as the “Front Palace,” which was the residence of the viceroys before that title was abolished.

The first building you will encounter after passing the entrance is the Sivamokhapiman Hall which houses the Thai History Gallery. Here you can get a detailed introduction to the country’s past, browsing through an array of artifacts, sculptures, paintings and historical objects dating from prehistoric times to modern times, through successive kingdoms over the centuries, including the kingdoms of Lanna, Sukhotai and Ayutthaya.

Next to the gallery is the former Phra Thinung Phutthaisawan, which was originally the courtroom of the palace. Today it has become a place of worship, where devotees can gather to pray before the golden statue of Phra Singh Buddha, which shines above an altar in the center of the hall, where the king’s throne originally stood. It is actually another reproduction of the famous statue found in the temples of Chiang Mai, Chiang Rai and Nakorn Si Thammarat. Take time to admire the interior, which is decorated with beautiful frescoes depicting scenes from the life of Buddha.

Near the Siwamokkhaphiman Hall, you can see a special reception hall which later became a Buddhist viharn. In the chapel, you will find the Phra Singh Buddha, a sculpture revered by the Thai people and whose history is ancient and very mysterious. In fact, there are three other copies of the statue in the rest of the country, each considered original by the locals. You will find them in Chiang Mai, Chiang Rai and Nakhon Si Thammarat.

The path to the museum passes through the Throne Hall, the former throne room now used for temporary exhibitions; behind it are the residential buildings surrounded by gardens.

In the central buildings that make up the palace, there are different sections devoted mainly to art. The many exhibition rooms house a variety of extraordinary treasures, including gems and jewelry, costumes and textiles, masks and objects used in the traditional Kohn theater, musical instruments, colorful ceramics, and a collection of ancient weapons.

In the north wing is perhaps the most interesting part of the collection; here the rooms are divided into different historical periods and each features sculptures, ancient artifacts, Buddha statues, and various objects.

One of the most interesting sites is the Red House, a teak building painted entirely in red. Its Thai name is Tamnak Daeng and it was once the residence of Rama II’s wife, Queen Sri Suriyen. The entire building still contains the original furnishings from that time and you can see some of the items that belonged to the queen herself. You can learn about the lifestyle of the time.

In the northern sector of the National Museum complex is the hearse shed, a fairly new building housing these ancient means of transportation used for cremations and royal funerals since the Chakri dynasty. The last hearse was used in 1996 for the funeral of the Queen Mother. Praphat Phiphitthaphan and Maha Surasinghanat. These are the newest buildings in the National Museum, built in 1967. Inside are large collections of art and archaeological pieces, divided by period and origin.

This complex, built in 1782, was originally surrounded by high walls, which have now almost completely disappeared.

Wang Na was the residence of several viceroys, an office given to the younger brothers of the rulers. The last of them, Wichaichan, died in 1885 and King Rama V decided to officially abolish this title of nobility.

From then on, the structure remained closed until 1887, when the Royal Palace Museum was finally moved from the Concordia Pavilion (where it had been inaugurated in 1874) to Wang Na.

In 1926, King Rama VII transformed all the palaces in the complex into a new national museum, which opened on November 10 of the same year.

Two more buildings were added in 1967, to the north and south of the central palace, while the rest are the original buildings from 1782.

How to get to the museum

The National Museum is located along Na Phra That Alley, at the intersection of the National Theater and Thammasat University.

It is in a fairly central area of Bangkok and only a few meters from Sanam Luang Square. It is also close to the Royal Palace and you can easily visit both attractions.

Open from Wednesday to Sunday from 9:00 am to 4:00 pm, the entrance fee is 200 baht. On Wednesdays and Thursdays from 9:30 am, free guided tours in English and French are given by volunteers; you can also request a guided tour in other languages upon prior request.

The best way to get to the National Museum is to take the ferry, get off at Chang Pier or Banglampoo Pier, then walk a short distance. From anywhere in Bangkok, you can take the Silom Line aerial metro and get off at the Taksin Saphan stop.