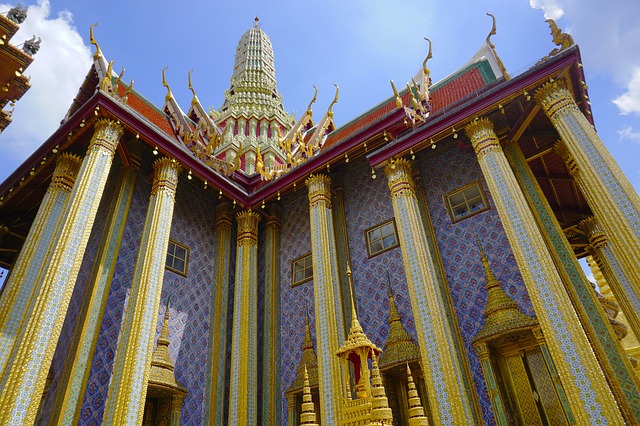 Contents hide
1 Video
2 How to get there
2.1 Related posts:

The visit that should not be missed under any circumstances is the visit of the historical complex Grand Palais – Wat Phra Kaew.

The bustle around the solid wall (2 km) of the Grand Palais, built in 1783, sets the tone for the importance of the place. The motivations of the pilgrims are multiple. On the one hand, there are those who come to follow the religious service, for whom (free) access is reserved. On the other hand, there are the others! Tourists, contemplatives in search of stories, art, wonders, magic, dazzle, dreams…

After a passage, under high surveillance at the entrance where one pays his tax (500 bahts, 14 euros, $16) and proves his correct dress (arms, legs, covered feet), without which refusal is categorical, the lair finally reveals its secrets.

The magic immediately makes its effect by the diversity, complexity, richness, quality and quantity of nuggets to be discovered. The curiosity of Wat Phra Si Rattanasatsadaram (official name of the temple) is the Emerald Buddha, hence its tourist name, the Temple to the Emerald Buddha. Placed on the altar of the royal bot, the sacred statuette (out of jade of 66 cm, cut in a large piece of green jasper) is the most venerated in Thailand. It is not for all that the most remarkable thing of the site. Without a tight organization, there is no salvation. The domain is immense. Statues, sculptures, bas-reliefs, frescos, temples, shelters of relics… The three-dimensional treasure, harmoniously bathed in vegetation, has no limits. The three hours allotted are not enough to apprehend everything as it should be.

Chao Phraya Chakri, who later became King Rama I, brought the image of Vientiane when he conquered it in 1778. King Rama I built the temple and dedicated the image of the Emerald Buddha to it as a symbol of the recovered nation. There are no monks in the temple. The entire temple is surrounded by a covered gallery whose outer wall is painted with sophisticated scenes from the Ramakian, the Thai epic based on the Hindu Ramayana. Each entrance is guarded by a pair of giant demons. Along the east side of the temple, there are eight large prangs.

How to get there